“This is a timely book, well written and highlighting an often ignored causal factor from a psychological perspective… The strength of the book lies in the compelling combination of well articulated individual stories with extensive research evidence and theory. Elaine Arnold contributes fresh ideas and perspectives to the field of race and mental health.”

Hári Sewell, Director of HS Consultancy and author of “Working with Ethnicity, Race and Culture in Mental Health”

Many of those who emigrated from the Caribbean to the UK after World War II left behind partners and children, causing the break-up of families who were often not reunited for several years. In this book, Elaine Arnold examines the psychological impact that immigration had on these families, in particular with relation to attachment issues. She demonstrates that the disruption caused by separation from both family and country often had long-term traumatic consequences. The book draws on two studies carried out by the author in 1975 and 2001. In the first, she interviewed mothers who had emigrated without their children, and in the second, children (now adults) who had been left behind and were later reunited with their parents. This insightful book is essential reading for social workers, counsellors, therapists and any other professionals working with people of African Caribbean origins.

Order “Working with Families of African Caribbean Origin”
Elaine Arnold is Director of the Separation and Reunion Forum, which she founded to highlight the traumatic effects of broken attachments, separation and loss. Elaine worked as a teacher, lecturer, child care worker, counsellor and psychiatric social worker, and her interest in attachment issues and separation was first sparked in the late 1940s, when teaching in a school in a children’s home in Trinidad and Tobago. Some of the children were there because of their parents’ emigration 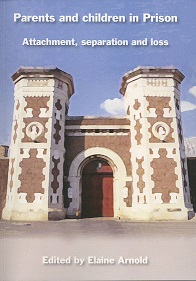 This book contains the papers from the 12th annual conference held in November 2011 by the Separation & Reunion Forum. The topics include young people talking about trauma and violence in their lives; psycho therapeutic work with a young woman in prison; applying the principles of nurture to life in custody; the Growth Journey and support for families and friends who step in when parents are imprisoned. There are also notes from the conference workshops, and information about organisations which support prisoners, people leaving prison and prisoners’ families. All the contributors have long experience of working in this field.

“This book is essential reading for professionals and non-professionals alike involved in providing support to prisoners and their families who are ’left behind’. In a time when the crime rate is falling, but the prison population is growing, the understanding of loss and separation and the inter generational effect, illustrates the complexities in this areas. At the same time this book offers evidence-based interventions that can successfully be incorporated into any programme that seeks to address reoffending. The whole range of narratives makes this a good read.”